I am not the target demographic for this story. Not in the least.  I'm old, fat, 47, and married with 5 children. On the flip side, I am a big geek and love my super hero stories; plus, the graphic novel club I'm in chose this for our D.C. selection for the month, so here we are.

First of, I know I should look at a volume in s series as part of a whole, but I still expect my stories in a collection to be fairly well-contained. The main plot of this story is self-contained, but there references to the previous run of Batgirl as well as Birds of Prey. so, going in, I'm a little lost. Where does this fit into main continuity? Is it pre-Killing Joke, post Killing Joke? If post, how is BabswalkingwhatthehellisthistensionwithDinahwhostheoldroommateandthenewonewhatsgoingonwhycantanyonehelpme?!!!!!! So, a minor quibble, as most of these are answered eventually.


Second, the resolution of the main plot is a bit of a cliche' or trope. Spoiler-free! Now, as the plot unfolded, I did not see the particular end coming until the Big Reveal and then I groaned. Of course, I'm as old as dirt, so maybe I read too much into the reuse. In some ways, it was a bit fresh and it's more akin to something from Star Trek than comics...although I have seen this same idea in comics as well.

The art is awesome! There are nice reveals and the color palette is wonderful. It's a hard rule, but most of the brightly-colored scenes take place in the day as Babs and most of the dark-shaded ones take place at night with Batgirl. Again, not a hard rules, but generally followed. Oh, and the "Sherlock" detection scene at the beginning is extremely well done.

Costume. Very nicely done! In some way elements of it harken back to Yvonne Craig's 1966 costume such as the palette and the bright yellow belt pouches. The yellow combat boots are a wonderful change from high-heel boots of any color. And the cover for the volume is simply adorable! 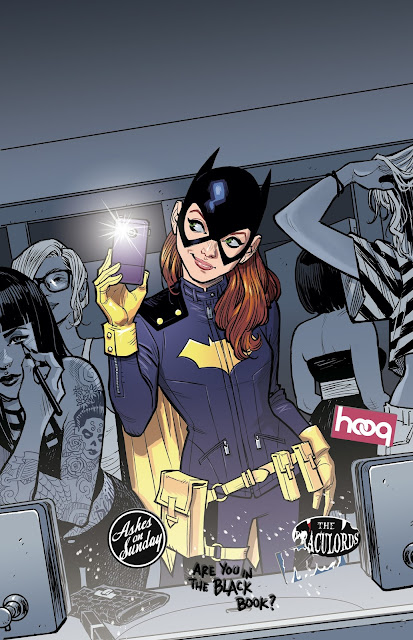 Friends & Allies. Diversity. It's a thing. It has always been a thing in the U. S. of A., culture was just completely whitewashed in the 1950s and early 60s. Her relationship with Dinah is complex...I'm a big Green Arrow/Black Canary fan since the Grell run, and I cannot see Dinah leaving Babs in the lurch like she does (bridge scene). Also, where they channeling Josey and the Pussycats or Dazzler for Dinah's arc?

Antagonists. We did not see the Bat Family Galley of Supervillains. Thank you, D.C. and Cameron Stewart! Sequins and bedazzler on the loose, too.

Burnside. Burnside is a borough of Gotham. As one of my friends described it, it's "gentrified." Hipsters and young 20-somethings. Very cliched, but not the same gritty dirty feel as Gotham "proper," or at least what we expect Gotham to be ("The audience knows what to expect, and that is all they are prepared to know."). But, from what we see of it, it feels like a place where hipsters and college students would hang out.

Social Media. Was it to excess? No. Social media is the world- and reality-filter that those 23 and below live in, by and large. It's well done. We live in an age where we carry mini-computers around with us, the power of the Interwebz in the palm of my hand. It's nice to see it used correctly and better and the tony Stark MySpace reference in the first Iron Man movie.

Overall. As i said at the beginning, I am not the target demo. The target demo is a 16-23 y.o. young lady with a touch of geek and hipster who wants to be Babs. That's the nature of comics; they are power fantasies that people can relate to and there's nothing with that. Women have been sorely mis- and underrepresented in the Super Worlds, and that is slowly starting to change (thank you!).