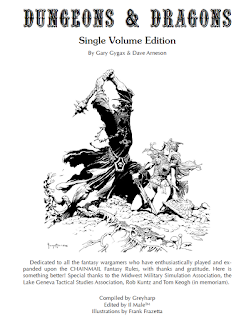 The section starts off with movement and reemphasizes the 120' per turn for an unarmored man and also the fact that chase scenes double the speed, but mapping is not allowed. Monsters reactions are next, and each monster is likely to be aggressive, neutral, or friendly, all things being equal.
Dungeon Encounters are next and there is a 1-in-6 chance every turn (or 10 minutes) of a wandering monster encounter. So, there should be at least one per hour; that's pretty steep! Distance of the encounter is 20-80 feet, unless surprise (2-in-6 chance) occurs, then distance is 10-30 feet. A chase sequence mechanic is laid out which seems like it would work well in practice and be easy to adjudicate. It is interesting to note that animals are more likely to stop pursuing for food, and monsters are more likely to stop for treasure; the two are inversely proportional. 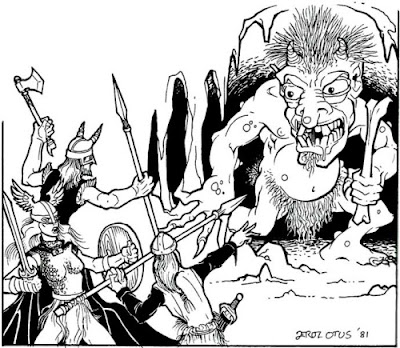 Wilderness Encounters are similar, but encounter distances are greater: 40-240 yards normally, 10-30 yards for surprise. Wandering monster checks are only made at the end of the day, however; apparently the Wilderness is more desolate than the Dungeon! Staying in one place is bad, however; for each full day of rest in the Wilderness, two wandering monster checks are performed. Evading in the Wilderness is a little more complex and is "a function of the size of the party of adventurers and the number of monsters, modified by surprise, terrain and comparative speed," (pg. 32). 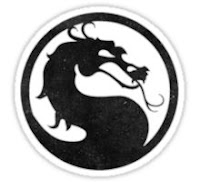 And now the meat of the Section: (MORTAL) COMBAT! The combat sequence is fairly simple and composed of 8 steps:

Surprise is determined by rolling d6 with a 1 or 2 indicating that the party is surprised. The distance is determined (10-30"); if the distance is 10" the non-surprised group will attack; otherwise, they get a free move action to either close, flee, or cast a spell. And then there's the best "eff-you!" rule in OD&D, or any version of D&&D for that matter: "There is a 25% chance that any character surprised by a monster will drop some item." Oops. 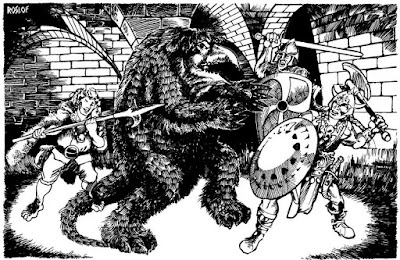 Once surprise is determined and acted upon, Initiative is rolled and modified upwards by 1 for high DX or lowered by 1 for low DX (the penalty, but not the bonus, is optional); highest roll on d6 goes first. Simple enough.

Then combat ensues: Movement, Missiles/Spells, Melee by the initiative winner, and then that sequence is followed by the losing side (if any remain able to resist). Initiative is rolled again, and the cycle repeats. Isn't this way simpler than AD&D, even using DM Prata's ADDICT article? 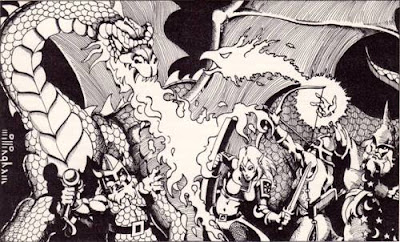 Some interesting notes: first, AC maxes out at two. Thus, magical armor's bonus adds to the target number to hit, and the plus of a magic weapon adds to the roll. Missile fire is a little different, and medium range adds 1 to the target's AC and long range adds 2. All weapons do 1-6 points of damage.

Unarmed combat is a single paragraph; each combatant rolls a number dice equal to level/hit dice and the highest number wins the grapple. Attackers pins the victim if he wins, and the if the victim wins, the attacker is thrown off and "stunned for a number of turns equal to the difference between the scores," (pg. 33). (A tie indicates that they're both still up and struggling; try again next round).

Saving throws are next, and there are no surprises here. Of note is the fact that the magic items only need to make a saving throw if they are unattended or the bearer is dead (exception -- helmets). Next follows two sections on aerial and naval combat which are pretty useful and well-written.

All-all-all, the section is short and to the point. It really doesn't get any easier than this. The only complicated (if one can call it that) parts are the sections on aerial and naval combat, but those are both special situations where a more in-depth look is appreciated.

And that's all for now, Next time, we'll pick up Monsters & Treasures! 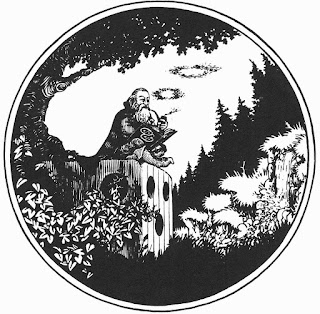