In an attempt to begin blogging again several times a week, I am starting a re-read of Original Dungeons & Dragons using the 2011 one-volume compilation of the LBBs by Greyharp and edited by il Male. And it's definitely a version I want to run. Even with PDFs of the LBBs available on RPGNow, this compilation has merit in that it is very well organized and usable. In his Foreword, Greyharp states that his purpose in compiling the LBBs was:

....to reorganize the 3LBBs into a single document. In doing so it quickly became apparent to me that Original D&D could be played without possessing Chainmail, and so I removed references to that game. I also removed references to the Outdoor Survival board game, which as far as the rules are concerned provided only a diagram to indicate in which direction a lost party was headed. A small amount of information was imported from The Strategic Review (page 3 & 4 of Vol. 1, No. 2), being Gygax’s official answers to the most frequently asked questions concerning the Dungeons & Dragons rules. Although some light editing was necessary in reformatting the 3LBBs into one volume, I kept it to an absolute minimum.

Besides, Frazetta art always sells me. So let's begin. 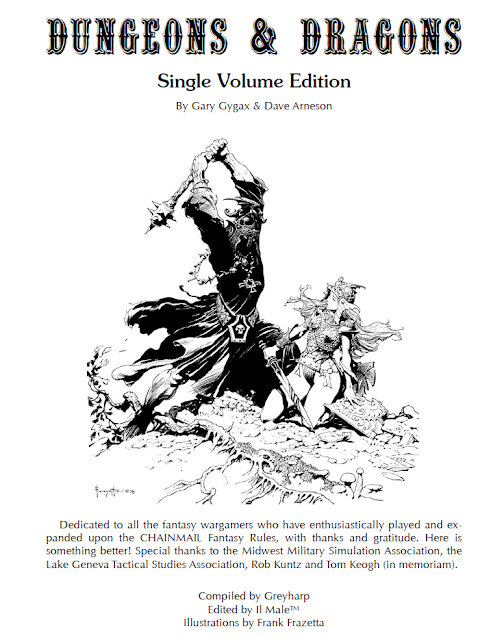 The only thing that really stands out for me here is this section:

The use of paper, pencil and map boards are standard. Miniature figures can be added if the players have them available and so desire, but miniatures are not required, only esthetically [sic] pleasing; similarly, unit counters can be employed - with or without figures - although by themselves the bits of cardboard lack the eye-appeal of the varied and brightly painted miniature figures (pg. 6, emphasis mine).

Interesting, eh? Especially for a game gaming out of miniatures wargaming--miniatures are not required but map boards are standard. There might not be a need for positioning figures on a map, but we need to see what's going on. This makes sense--minis can slow down play, but everyone having a visual representation of the terrain is most useful. Of course, this is probably just a reference to the Outdoor Survival game mapboards....but maybe not. These are just my impressions, after all.

No surprises early on: stats are 3d6 in order, 3d6 x 10 for gold pieces. Of course, there are not many bonuses out there yet, just a couple of +/-1s. The most important reason for a high stat is the 5%-10% xp bonus for having a high perquisite.

But there is something I've never caught or thought much on before: Constitution of 13+ does not require system shock/resurrection rolls, 7-12 varies from 40%-90%, and 6- cannot survive at all! So, if one is reasonably hearty, one is pretty safe from all of those death chances!

There are, of course, only three classes: Fighting Man, Magic-User, and Cleric. There is no Thief class, something we think of as "core" in these days. There is an alternative (about which more below), but I am not convinced that I would use it. Oh, poor 1st-level Clerics with no spells! As far as non-human races, only Dwarf, Elf, and Hobbit. All three can be Fighting Men (with level restrictions), only the Elf can be a Magic-User, and none can be clerics. Speaking of which, Clerics can only be Lawful or Chaotic: no Neutral priests! (This would, of course, lead to the Druid class in Eldritch Wizardry.)

This leads us to the Elf and early multi-classing. Only the Elf can choose to be both a Fighting Man and a Magic-User, but he must choose which class he is to portray at the start of the session and cannot change to the other during the adventure. This has little effect than determining which set of hit points and attack tables to use as the Elf, even when acting as a Magic-User, gets to wear magical armor and wield any weapons. If the Thief as shown below is used, I would limit the Elf to leather armor, possibly magical when acting as a thief.

One last comment on races: "There is no reason that players cannot be allowed to play as virtually anything, provided they begin relatively weak and work up to the top, i.e., a player wishing to be a Dragon would have to begin as let us say, a 'young' one and progress upwards in the usual manner, steps being predetermined by the campaign referee," (pg. 10).   o.O   Headache, definitely a headache. On the other hand, it just shows that tinkering is encouraging and that these are more quick and dirty guidelines instead of hard and strict rules. And hence, my preference for the title of Judge rather than that of Dungeon Master or Referee. 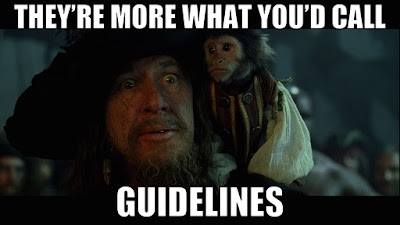 Alignment is the three-part system of Law, Neutrality, and Chaos (thank you, Moorcock), but I did note that Ogres and Orcs are both listed as having Chaotic and Neutral as valid choices. That makes killing off orc and and ogre babies a little problematic. How a Judge handles this in his campaign is up to his discretion, but there could be kingdoms of Neutral orcs who try to hold the line against their Chaotic and barbarian kin.

"Law, Chaos and Neutrality also have common languages spoken by each respectively" (pg. 11). This doesn't bother me as much as it does in AD&D. I can see the language of Law similar to use of Latin in the Middle Ages by the Church or maybe Celestial from later versions of the game. Maybe it's because there are only 3 and not 9 as in AD&D.

Money and Equipment comes next. 5 copper to the silver, 50 to the gold, 10 silver to the gold. Electrum is either 2 to the gold or 2 gold to the electrum (Judge's choice). There's also the footnote on the list not repeated in the Combat section (I checked!) that states, "Any hit should be given a 10% of striking the Helm." We're going to assume that means head, so that there is a 1-in-10 chance of some cheapskate not wearing a helmet getting a hit to the AC 9 noggin!

And that covers he first two section of the Complied LBBs! Up next: Section 3: Spells & Magic.

This compilation lists the Thief class, as taken from the Greyhawk supplement, in an appendix. However, that is a little unsatisfactory as the class is written under the assumption that hit dice are now different dies for each class, the improved stat bonus also from Greyhawk, etc., and requires tinkering to work with just the original LBBs. What to do?

Well, back in February of this year (2016), the Zenopus Archives had a post about the Thief class as envisioned not in 1975 with Greyhawk, but rather as envisioned in 1974 in the Great Plains Game Players Newsletter (May, 1974).  There is much to recommend this version over the later published version. Climbing sheer surfaces seems to be automatic, shield use is unclear (Judge's discretion!), and, most importantly, the class is open to all races with no level limit on advancement. That stops the crying about maxing out a demi-human's level and is the main reason I would probably use this class. Feel free to check it out as an alternative to the published one if you prefer the 3 LBBs but want a thief class.
Posted by Anthony N. Emmel at 11/21/2016 02:12:00 PM