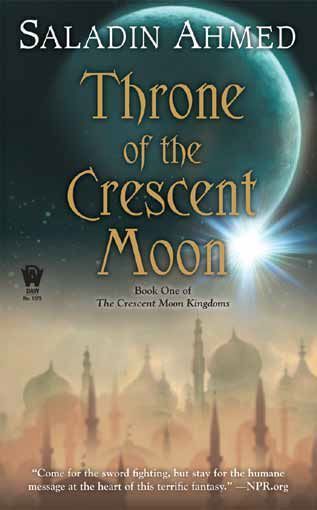 Throne of the Crescent Moon﻿ by Saladin Ahmed, DAW Books, ISBN-10: 0756407788.
I picked this book up, well, not a whim, but I was going through a book store trying to find something that was interesting but not derivative of Tolkien or Moorcock or anything else. This one caught my eye. Even as a kid, I've loved "Arabic" fantasy such as the film  The 7 Voyages of Sinbad and in D&D the second gazetteer of the Known World, The Emirates of Ylarum. I was never nonplussed by the inclusion of Azeem in Kevin Costner's Robin Hood: The Prince of Thieves. As a budding historian, I read the Qu'ran in 1992 or so, well before 9-11 and gloried in Francisco Gabrielli's Arab Historians of the Crusades. In fact, when I went through my crisis of faith while in the Army during the winter of 1988-89, al-Islam was one religion I seriously considered; it even made the "short list" along with Roman Catholicism, Greek Orthodoxy, and Judaism. So, when I saw this novel and read the cover and thumbed through it, it went in the basket.
A little background as well. The author is a native of Detroit which is always a plus for me; friends thinks it's strange that a 6th generation Texan such as myself would love Detroit so much, but there it is! Ahmed has written several well-received short stories, a collection of which is sitting in my Kindle, waiting for more leisure time. This is his first novel, but it is nominated for both the Nebula and Hugo awards. The author's website is located at: http://www.saladinahmed.com/wordpress/
Some more random thoughts before I delve into it, though. My campaign world of Erda/Kith-Kanan has (of course!) a semi-Middle Eastern area in it named "the Land of the Five Prophets." It is built around the ruins of the ancient Aegyptian Kingdom and religion, a false worship that centered around Shaitan in his aspects of Set and Anubis. The Five Prophets arose at the same time and led the way of the people back to the worship of the One, called the Merciful and Compassionate and never specifically named by them. The players that I've had in Erda over the past 26 years have never directly dealt with the area, but it is in my copious notes and backstory. So, yes, I will tend to look at this novel through "gamer" eyes.
Rasheed the Dervish appears to be a standard 1E monk that uses a double-forked sword. The young female shapeshifter, I can see as a DragonQuest shape-changer as a lion rather than a tiger. There is an alchemist and a healer. the ghul hunter's magics are low key and fit the setting; not sure how I would classify him; maybe as a DragonQuest Namer or possibly a Star Mage. The "Ancient Egypt" of the world is "Kemet." I chuckled because I've read Kmt, the journal of ancient Egyptian archaelogy since the late 1990's; Kmt is the ancient hieroglyphic name of Egypt. I must call mine K'm't now!
The novel centers on Doctor Abdoulla Makhslood, the last of the ghul hunters. Ghuls are apparently magical creations similar to golems made through necromancy that binds elements and death beetles (scarabs?) into a living form; they are slightly different from the haunted "vampires" that haunt charnel houses in Middle Eastern folklore. Accompanied by his protege, Rasheed the Dervish, Abdoulla uncovers a plot that threats the jewel of the lands, the great city Dhamsawaat, his home. Of course, the ghul hunters and his other practitioner friends are somewhere near the bottom of the social totem pole and are seen as charlatans and hedge wizards by the social elite. It's hard not to give any of the plot away, because it does some really neat twists and turns. The atmosphere is evocative and believable. It is also derived from tales such as Sinbad and the like. This is definitely not Tolkien-derived.
I give this book 5 polar bears. It is more than worth the time to read. It is the first of a trilogy and, to be perfectly honest, I've not had more anticipation for a series release since I read Harry Turtledove's Videssos Cycle in high school.
Posted by Anthony N. Emmel at 5/10/2013 01:47:00 PM